ATC’s latest production at Q Theatre tells a historical tale of the ill-fated Anne Boleyn  in a time of randy royals and religious power and corruption. The cast themselves are somewhat New Zealand’s theatrical royalty, providing an excellent performance of Howard Brenton’s 2010 play.

The stunning Anna Jullienne plays the shrewd Anne Boleyn whose political ambitions see her rise to power as the Queen of England while championing the cause of Protestants  at the time of Reformation and  the Tyndale Bible. This is a demanding role where she  creates a very modern feeling character. Her journey sees her shamelessly flirting, secretly conspiring and sorrowfully morning. All with her Bible close, and faith unbreakable.

Staying on Anne’s side from the get go is Lady Rockford, Claire Dougan, who provides a strong backbone to Boleyn’s plight. 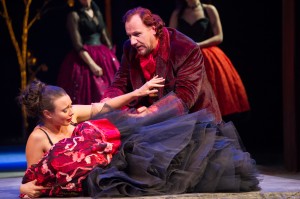 Booming on to the stage is Henry VIII whose stature, power and eye for the ladies is wonderfully and playfully portrayed by Andrew Grainger. Red hair and red fur cover this already powerful looking character. I loved his command and ownership of the space. His cheeky embraces with Anne provided for some flirty fun.

The energetic extravagance of Stephen Lovatt’s James I was brilliant! A definite highlight which cleverly contrasts with some of the more meaty theological moments in the play. Dressed like a cross between a Bay City Roller and Billy Connolly, he outrageously fondles his on-stage plaything George Villiers, played to camp perfection by Jordan Mooney. This charismatic and fun performance was totally unexpected but works well. 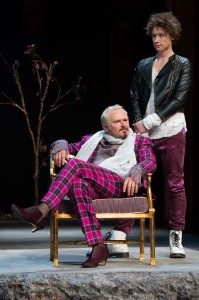 Offering up a strong and authoritative performance is Paul Minifie perfectly cast as Cardinal Wolsey. Playing the villainous and intimidating Thomas Cromwell is Simon Prast who has fun with his characters gradual release of corruption. His threatening stance is complimented by his black suit and  leather gloves which accentuate this dark personality.

Brenton’s writing will constantly surprise you. Sarcasm, wit,  and intelligence roll off the tongues of the a talented cast while they communicate what is a monumental part of the World’s history.

Visually the creative team have presented this education in a mishmash of vibrant costumes from many time periods on an almost bare set. There is an energy within the production which entices you in and holds your attention. The direction is contemporary and also fun, but knows when to rein the actors in.

Anne Boleyn is on at Q Theatre until 13 July