There’s nothing small, soft or fluffy about Silo Theatre’s latest international play White Rabbit Red Rabbit. Instead, this powerful work by Iranian playwright Nassim Soleimanpour is an experimental and playful examination of a social phenomenon – obedience.

Since the play premiered in 2011 (simultaneously at SummerWorks and Edinburgh Fringe Festival) it has been performed around the world, translated into over 15 languages and garnered a series of accolades.

This raft of geographical success adds to the plays mystic, as one overriding theme that Soleimanpour explores is ‘freedom’ and more particularly, freedom in the form of travel.

After refusing to complete compulsory military service in Iran, Soleimanpour’s passport was revoked and he was not permitted to leave the country.

Sizing his predicament as an opportunity, he created White Rabbit Red Rabbit, a play rich with contemplations of restraint, a play that could reach outside Iran’s boarders and travel the world on his behalf.

Heralded as ‘the worldwide phenomenon that no-one’s allowed to talk about’, this play is a slippery one, both its format and content are exciting and new.

The plays ‘script’ is delivered at the very start of each show, and the play’s cast is made up of a single actor, who delivers the part only once; each night a new actor takes the stage.

Amongst the unavoidably underprepared cast are a few colourful surprises including local celebrities, Nick D and Dai Henwood.

The format is delightfully contemporary and you can feel the very paradigms of theatre shift underneath you as you wait in anticipation, who will command our rendition of White Rabbit Red Rabbit? 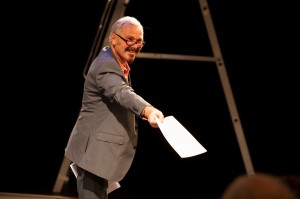 The answer came as veteran Neighbours star, and award winning thespian, Stephen Lovatt jumps on stage with a commanding grin.

A few benign props are composed on stage and throughout the play they gain great significance through moments of instructional narration, imaginative storytelling, and exhilarating audience participation.

Early on the audience is eased into the idea of participating with a beginners task – to number ourselves – as we snake our way along each row of the audience like a mathematical Mexican Wave, I find myself strangely aware of my position: number 45 of a total 123 including ushers, and Lovatt.

It’s what gives the play its edge, this persistent and rising sense of awareness of our role as a docile audience, and how this can be a metaphor for obedience in a greater sense.

Don’t get the wrong idea, White Rabbit Red Rabbit’s sharper confrontational moments are often hidden, at most points the play has a surface of honest, cheerful, glowing moments such as a spot on ostrich impersonation, unrehearsed grizzly bears and assorted real life anecdotes.

The magic of this play is its experimental nature and in what you don’t know, what no one knows – the actor, the audience and even the writer – White Rabbit Red Rabbit is not one to read about, it’s one to experience – go, climb the ladder, grasp the carrot and discharge yourself from your obedient nature.

You can see White Rabbit, Red Rabbit at Q Theatre until 13 July