The Broadway, West End and international sensation STOMP is back, and it’s better than ever!

Following their acclaimed performance at the Closing Ceremony of the London 2012 Olympics and their 11th run in London’s West End, STOMP returns to New Zealand from 30 July, with new routines, new choreography and new music.

STOMP has become a global phenomenon after their debut at 1991’s Edinburgh Festival in Scotland. Using rhythm, theatre, comedy and dance STOMP has resonated with audiences throughout the world over the last 22 years.

You will defiantly start looking at your household object differently after seeing this show. From shopping trolleys to plastic bags, the music comes from the most unlikely instruments.

There are two new routines that have been introduced in 2013 including “Trolleys” which taps into the everyday experience of negotiating a busy shopping aisle with a fully laden supermarket trolley.

Producer James Cundall, CEO of Lunchbox Theatrical Productions says “STOMP has to be one of my favourite shows.  It is a unique and supremely clever idea, to create music from everyday objects and combine it with side-splitting comedy and intricate choreography to produce a polished theatrical performance, the likes of which you’ve never seen before.”

Having last visited New Zealand in 2009 where STOMP and enjoyed a sell-out season, Co-Creator/Director Steve McNicholas said  “We are really excited about coming back to New Zealand, If you’ve never seen STOMP you should come and see what all the noise is about, and if you’ve seen it before then this show has plenty of new routines to enthral.” 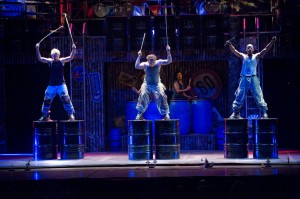 ‘Stomp brings the house down’ The Independent on Sunday, UK

THIS COMPETITION IS NOW CLOSED

We are giving you the chance to win two tickets to the opening night in Auckland on August 6 at 7.30pm at ASB Theatre. All you need to do is tell us when did STOMP last appear in New Zealand?

*To enter simply go to our Keeping Up With Us page and fill in the form. Please use the subject line STOMP and in the message write your answer and postal address.

STOMP 13 will be in NZ from the end of July;

Auckland – 6 to 11 August in Auckland for eitght  shows at ASB Theatre, Aotea Centre