Written and directed by Thomas Sainsbury, Cat and Mouse is a rude awakening into how the modern version of getting together has replaced the traditional. lust and confusion rule, with commitment nowhere in sight.

Roberto works as a barman and is on duty one evening when Cat, who also calls herself Pussy, is stood up by her date in his bar. Cat is every guys dream. Beautiful, friendly and sexually uninhibited, she’s always up for a good time with no strings attached. It is obvious however that it bothers her that guys see and treat her this way. Cat wants to be taken seriously as girlfriend material, her approach however consistently thwarts her attempts.

Surprisingly Roberto remains impassive to Cat’s wiles and he registers indifference, bordering on tedium when she gives him her number.

Enter Cleo several days later. Cleo is sophisticated, educated, self assured and aloof. She is also the spitting image of Cat. After a rather volatile exchange of words which see’s Roberto unwittingly tell her “You’re Pussy!” Roberto is smitten and Cleo is unimpressed. 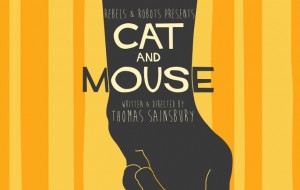 The roles of Cat and Cleo are spanned effortlessly by actress Elizabeth McGlinn. She adapts each role with ease and gives swift and seamless transition from character to character. She sells the airhead garrulousness of Cat beautifully. Her inserts of innocence and bewilderment make Cat a readily accessible character and easily relatable. Elizabeth performs the same magic for Cleo, creating an authentic cold-hearted vixen spiked with fleeting moments of human fragility. Elizabeth McGlinn’s ability to switch modes with professional aplomb makes her  the star of the play.

Roberto, played by Roberto Nascimento gives a believable performance of barman Roberto. His perfunctory reactions to each woman, and the situations he finds himself in, had me worried about the state of mind one must have to adopt to juggle two different people and relationships. I fell hook line and sinker for his portrayal, and found Roberto’s lack of emotional affectedness in his situation disturbing.

An hours worth of twists and turns with an unexpected ending Cat and Mouse is an excellent mirroring of society’s love triangle dilemmas, complete with the accompanying foibles and angst.

Cat and Mouse is on at The Basement Theatre until 13 July.