Jennifer Ward-Lealand leads the cast in Richard Bean’s serio-comedy, The Heretic, which challenges the ‘it’s good to be green’ ethos. This latest production from Auckland Theatre Company is a play that provokes both laughter and debate, as well as a want to find out the truth about global warming.

The story is set in the world of scientific academia in York University. Dr Diane Cassell (Jennifer Ward-Lealand), after 20 years of research on raising sea levels in the Maldives, is left with the conclusion that there has been no change. As a pragmatic scientist she fuels the climate change debate with her scepticism calling it ‘the perfect religion for a narcissistic age’. Her comments soon get her in hot water resulting in her receiving death threats.

The set is simple with only one change at the interval. The projected backdrop during the first half of a tree growing on a beautiful beach, draws the eye but does not distract from the verbal barrage of Bean’s wonderfully sarky dialogue. 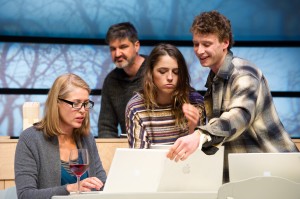 Climate change and global warming are not the most obvious topics for a comedy, but there is colourful language and plenty of one liners to produce a fair share of laughs. However their are two parts to this play. There is Diane’s professional life complete with office romance and disturbed student, and her home life, where she deals with an emotionally challenging daughter with anorexia.

The second half of the play shifts the focus altogether from debate to emotions. I enjoyed this flip as it was unexpected and gave depth to the characters. Jess Holly Bates, who plays Phoebe Cassell, is in control of this emotionally challenging role. She creates a not always likeable, but a realistic, erratic and vulnerable young women. Similarly Jordan Mooney, as climate aware Ben Shotter, is excellent in his ability to present the character arc from hapless student to a mentally fragile man in a smooth and well conveyed manner.

This play presents it’s audience with a different view of the climate debate and may leave you questioning what you thought you knew. The balance of professional and personal is strong here, and the developing relationships work well with the supporting cast. Some of the comedic highlights come from Andrew Grainger, as ex marine security guard Geoff Tordoff who delivers excellent physicality and perfect comedy timing. Director Alison Quigan’s theatrical and comedic experience have enabled her to give the text the time to shine and allowed the actors to create the momentum and comedy timing needed to present this script.

Stelios Yiakmis plays Professor Kevin Maloney, academic, boss and romantic lead all rolled in to one. He has a playful time with the character and some of the bureaucracy around his character reminded me of my Yes, Pirme Minister experience a few weeks ago. Maybe education and politics are not so different.

Jennifer Ward-Lealand is, as always, a wonderful actress to watch. She gives a strong and confident performance with a well balanced  Dr Diane Cassell, which had a ‘warts and all’ feel to it. Her ability to communicate the subtlety of this characters insecurities was unique, and her performance is commendable for it’s honesty, wonderful delivery and consistent energy.

The Heretic is a thought provoking piece with merges the unusual combination of comedy with science with a humanist stance.

You can see Auckland Theatre Company’s production of The Heretic at The Maidment Theatre until 10 August.