This story of trust and betrayal  discusses relationships and our part in them.

Opening with a mirrored discourse between two couples, we see married people about to enter into a one night stand. Pete and Sonja leave without ever having gone through with it, when Leon and Jane have. With the echo of dialogue we experience their turmoil and fears. Once the couples are reunited with their spouses the plot pushes the audience into the awkward and heart wrenching pain of a rocked relationship. Stranger still was Jane’s story of seeing a neighbour is suspicious circumstances disposing of a woman’s shoe? The play progresses in the second half to expand and explain this story. 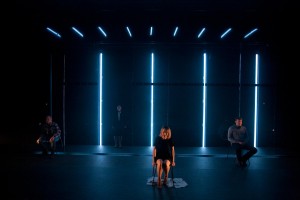 Set on a plain black stage with see through panels, the use of lights was all that was needed to highlight each conversation. This is a play for thinkers and those that want to discuss its issues afterwards. It’s intense , and if you want something that will just wash over you then this isn’t for you. I found the second half more compelling as it moves and twists around to a more mysterious narrative, film noir almost.

As expected from a Silo production the cast is of a high calibre with Alison Bruce , Oliver Driver, Luanne Gordon and Stephen Lovatt giving highly charged, intelligent and tactful performances. With Speaking In Tongues love really is a dangerous game.

Silo Theatre’s Speaking In Tongues is on at the Herald Theatre, Auckland,  until 14 September.