At the Basement Theatre last Thursday night I observed what I would eventually attempt to describe as punk-rock theatre. As it turned out I could be excused of my misplaced but enthusiastic comparison, but on a plus side it was appropriate for a number of reasons. Firstly, like a good punk-rock show, the performance did not exceed one hour (it was approximately 40-50 minutes). More notably, it lacked pretension/extravagance and was executed with a type of persuasion that left me assured that I had seen something  quirky yet exceptional.

Balmy is a production by Holly Chappell and Tom Eason who have both recently graduated from Toi Whakaari: NZ School of Drama and subsequently formed their production company – Two Productions. Balmy is set in a funeral home and features five characters, four of which are played by Tom Eason himself. Roger the funeral home boss, Patricia the disengaged and  gossipy receptionist, Dave the hearse driver and the mysterious hitch-hiker. The lead character is played by Tai Berdinner Blades (TV 2’s Go Girls) who embodies the awkward but sweet Julie who works part time at the funeral home and wishes to learn more about the practice of embalming.

Throughout the performance the audience is reminded of the immense humanity that is hidden amongst the most subtle of creatures via an assortment of black comedy, philosophy and clever dialogue. Almost all the characters oppose the natural charm of Julie, who seems at home within her own imagination – until the enigmatic hitchhiker makes an appearance… The sound is looked after by the esteemed Thomas Press who complements the elements of uncertainty and curiosity and also provides a great backdrop for Dave the hearse driver’s weirdly humorous classical air guitar pieces. 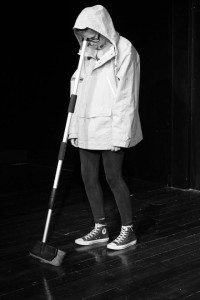 It is difficult to review a play like Balmy because of its lack of narrative closure and the nature of its ambiguity, but I loved it and felt comfortable leaving with a bunch of questions rather than answers. My mind was a bit frazzled but I was content that what I saw was real and strived for something beyond mere entertainment; just like a punk-rock show aye.  Make sure you keep your eyes peeled for more gems from the Two Productions crew, and, if you die in the meantime I now know of an apprentice embalmer that could do you a great deal.