Written by Patrick Marber and directed by Cameron Rhodes After Miss Julie is a reimagining of an August Strindberg tragedy. It is immensely watchable, fast paced and filled to the brim with confrontations and vicious banter. The dialogue is darkly funny and bitter, as the characters use one another as verbal, and occasionally literal, punching bags. Things only grow more caustic as the play goes on, and I found myself transfixed just waiting to see how Marber would top himself next.

The theater above the Basement is shaped in such a way that the performers are at once closed in and left completely open. The seating surrounding them, the actors having to play to all sides. This set up only amplifies the high emotions on frequent display. Thankfully, the leads are all up to the task. Both Shand and Hillock are able to suggest a shared history in their chemistry, and where those histories diverge in the various ways they play their outbursts, whether withdrawn or on the offensive, barely keeping it together or gleefully twisting the knife. Kennedy’s role is smaller, but she brings true pain and anger to her limited stage time. 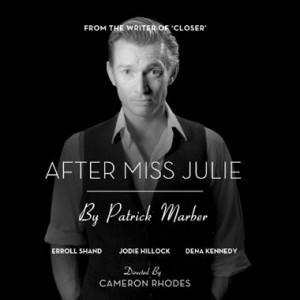 On occasion, some of the poetic flourishes in the dialogue can ring a little too written, but are evocative enough to forgive. And the constant ratcheting of hysterics can also be too much at times, the story seemingly arriving at places unthinkable only a short while ago as potentially minor details are glossed over. Ultimately though, the emotions behind these exchanges remain vivid and understandable.

Despite the shifts in power over the course of the play, all three characters reveal themselves as victims in one way or another. Now if only they could stop taking it all out on each other.

After Miss Julie is at The Basement Theatre until 7 September.