Many of us are familiar with the story of Lord Of The Flies by William Golding, which was adapted for the stage by Nigel Williams in 1995. A group of school boys are stranded on an island after a massive plane crash, and they quickly lose society’s rules and laws to become ‘at war’ with one another resulting in violence, disorder and bloodshed.

This classic tale of good boys gone bad, and the metaphor of what makes society civilised, is expressed perfectly by Auckland Theatre Company’s latests production. 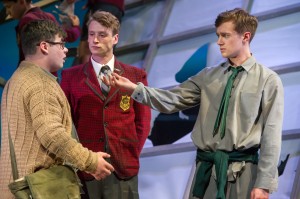 I really can’t sing the praises of Leon Wadham, Jordan Mooney and Zane Fleming enough. Wadham and Mooney play the conflicted leaders Ralph and Jack, with Fleming taking the role of ‘Piggy’. All give an energetic, emotional and flawless performance accents an’ all. ‘Piggy’, the working class voice of reason, is proved right more than once but ignored in equal measure, dominated instead by the ‘ruling classes’ of  Jack and Ryan.

The physical demands of this piece are high and none let it down. Relentless energy fills the stage. The constant build in aggression and violence is communicated excellently within the pace and style of the direction by Colin McColl and Hera Dunleavy.

I also enjoyed the performance given by Anton Tennet playing Simon . Although often in the background, his presence communicated his personal message clearly and with high impact.

The younger members of the cast also do a great job in their supporting roles. Daniel Sewell as Perceval represented the innocence they have all lost very well, and also acts as a constant reminder that these are in fact ‘children’ we are watching.

The set cleverly mirrors the demise of civilised behaviour from the ‘boys’. A tall wooden frame with perishable squares of paper dominate most of the stage, where a more rudimentary structure looms in the other corner of the space. Tracey Collins’ design theme is reflected in the costumes by Kiri Rainey. They subtly change to show the passing of time and lack of morals and rules, going through the same wear and tear as the set. From conventional school uniform, to body paint and spears. 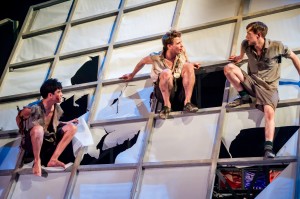 Events spiral quickly out of control and the fact that this play shows in one act complements this. I wouldn’t have it any other way.

If you were inspired by the text at school this production will reignite the themes and discussions that you previously found academic, but will now find to be a terrifying, horrific and an enthralling theatrical experience.  In short Lord Of The Flies is an extremely strong production that I highly recommend you see it during it’s run at The Maidment Theatre.

Lord Of The Flies will be at Maidment Theatre until 28 September.