Abigail’s Party is a classic piece of British playwriting from Mike Leigh. Set in the living room of the up and coming middle classes of British 1970’s suburbia, we are treated to a fly on the wall evening not to be forgotten.

This now beautifully kitch and wonderfully witty script is full of both cringe worthy and thoughtful social commentary that results in a hilarious, if not awkward watch. Taking place in Beverly and Laurence Moss’s living room with the back drop of neighbour Abigail’s teenage party going on a few doors down.

Beverly and Laurence are chalk and cheese, her, a flirty, OTT, bored sex starved house wife and he, an over worked and status obsessed Estate Agent. Within their living room we meet their new neighbours Angela and Tony Cooper, and they awkwardly converse. Later they are joined by Sue Lawrence, the anxious divorcee and mother of Abigail, the teenager having a party across the road.

The evening is plied with alcohol and a varying soundtrack from Elvis to Beethoven’s Fifth Symphony. However appearances can only be kept up for so long and as the alcohol flows the masks begin to slip. 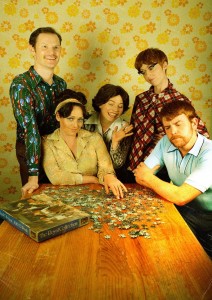 This production has embraced the naff and cringe of the 70’s social scene along with a wonderful set of carefully chosen retro furnishings and nick-nacks.  Costumes are used to help define the characters with Beverly in a floaty glam number and Laurence in a dull brown suit.

Uptight Laurence, played by Simon Vincent, has something of the Basil Fawlty about him. His anger and frustration about his wife and, well nearly everything around him, made for lots of comedic and uncomfortable moments. Tony, played by Nic Samson, has little to say and shares some subtle and not so subtle disdain with the audience throughout the play. His character has an interesting progression and his presence oozes resentment.

Stressed out mother Sue, similarly tries to keep her nose clean, and out of the intrusive conversation. Actress Jacque Drew does a great job at communicating this poor women’s awful predicament. Sophie Roberts as Angela collected many of the early laughs in the play through her excellent nervous and overly childlike enthusiastic responses to everything presented to her.

However the star is our leading lady Beverly, played by Andi Crown. This almost hideous, but loveable creature, dominates the conversation and steers her puppet guests into many a conversational cul-de-sac. Seemingly unaware of her selfish and embarrassing behaviour Beverly is a joy to watch. She’s brazen, rude and bossy, yet still likeable. Her west country accent with ‘ya know what I mean’ tagged on to many lines was spot on, and her comic timing was faultless. Her killer one liners will make you wince and smile at the same time.

My only criticism would be that the accents slipped a little for a few of the cast within an overall tight performance.

Directed by Sam Snedden, this production is delightful and is extremely well executed by a talented and fun cast.

Abigail’s Party is at the Basement Theatre until 21 September.