Everyone donned green for the opening night of Wicked at The Civic in Auckland. This beautiful, and grand theatre, is the host to the multi-award winning Broadway and West End hit, which is now in its 10th year and finally in New Zealand!

Having previewed earlier in the week, there was already a lot of buzz about this production, so obviously I just couldn’t wait to see for myself.

Wicked tells the story before ‘Dorothy dropped in’ of Galinda and  Elphaba, aka Glinda The Good Witch and The Wicked Witch of the West. A show that cleverly pokes fun at its Wizard Of Oz heritage, Wicked weaves the original story within this prequel, starting with Elphaba ‘s birth right up to her demise at the hands of a child. Forget everything you thought you knew about Oz, the Emerald City and the fight between good and wicked.  Prepare to be rocked by the revelations of this back story.

As expected the set looks impressive and expensive. A huge dragon looms over the audience at the top of the stage. An imposing animatronic version of the Wizard Of Oz is a great theatrical achievement within this production. Costumes are suitably fabulous, and I imagine hugely pricey. Galinda’s gowns are glittery, jewel encrusted spectacles which demand a certain amount of stage space! The Emerald City inhabitants are the fashion saavy in green and there is more than a nod to the original Wizard Of Oz style within many of the costumes. 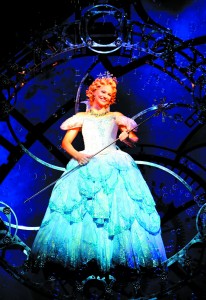 Glinda played by Suzie Mathers in Wicked in her gorgeous gown

With this successful musical having been around for a decade it is likely that you will recognise some of the songs, even if you have never seen the show before. There’s a couple of full on show stoppers as well as great, and perfectly pitched, ensemble numbers. The crisp impeccable audio means you would be excused in thinking that these weren’t live performances, but they 100% are, with a live orchestra in the pit too. The excellent sound quality is thanks to industry experts having flown over from the US to ensure this perfect experience.

New Zealand’s Jay Laga’aia joins the Australian cast as The Wizard Of Oz. His first appearance on stage was greeted with cheers and he pulls out an admirable and ‘Wicked’ twist on the great Wizard.

Maggie kirkpatrick brought the school mistress Madame Morrible to be the larger than life character needed to manipulate the girls to her advantage. Another strong performance which was extremely well received.

The ladies love interest Fiyero, played by Steve Danielson, is also not all he appears to be. A fun and energetic performance where he waxes both humour and emotion turmoil.

Both leading ladies are remarkable, and perfectly opposite within their characters. Chirpy blonde and beautiful Galinda, is a tongue in cheek goody two-shoes who is funny, excitable and may not be as sweet as she sounds. Suzie Mathers displays excellent vocals and comedic flare ,where she does a great cooky spoilt rich girl. I enjoyed her random squeaks, fun intonations and stunning soprano song. 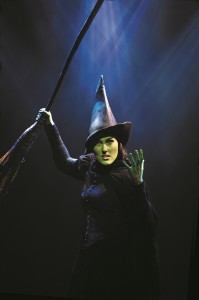 Jemma Rix as Elphaba in Wicked

Jemma Rix’s portrayal of green skinned Elphaba, was the performance everyone couldn’t stop talking about. What a voice. She really is phenomenal and such a talent. The highlight of the evening was definitely ‘Deifying Gravity’ both in the excellent vocal performance from Jemma and Suzie, but also in the jaw dropping stage direction. Jemma’s excellent performance will take your breath away.

It’s difficult to sum this up without sounding gushing so I’m just going to go for it. This really is a musical spectacular that is both enthralling and visual stunning. It features a magnificent cast giving a world class performance. Go and see Wicked or you may end up green with envy of all who do!

Wicked will be at The Civic for a limited season so book soon to avoid disappointment.