Richard Wagner’s  The Flying Dutchman is the current production from NZ Opera at the ASB Theatre, Aotea Square.

Opera can conjure up many images in the minds of those that find it to be unreachable or inaccessible. This production excellently dispels any stuffy or elitist impressions with a contemporary and confronting version of this ghostly nautical tale.

The doomed Dutchman is on a ghost ship that endlessly sales the oceans. However every seven years he is able to go to shore. If he finds a wife who can be his ‘saviour’ his curse will be broken. Appearing to sea captain Daland, and hearing of his unmarried daughter, the Dutchman asks for her hand not long after flashing some of his gold treasures by way of persuasion. Daland agrees and he sails his weary men home. Turns out Daland’s daughter, Senta, already idolised the Dutchman as his legend surpasses him, but will she be the Dutchman’s saviour? 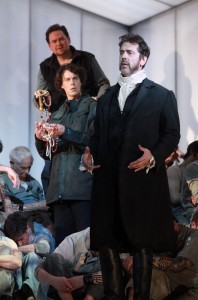 Daland opens the story on stormy waters and performs in both close quarters and hanging on to a ladder. His responsibility for setting the scene is executed well and his authority obvious. I was very impressed with The Steerman Shaun Dixon whose strong delivery from Act I was impressive and tenacious. Orla Boylan is fantastic in her role of Senta, with her duet with The Dutchman, and final song, being the highlights. The Dutchman, played by Jason Howard, is a sad and desperate character and I felt his strongest performance was in Act I where he was able to set the tone of the despair his characters’ curse presents him with. However I found both The Dutchman and Daland harder to hear in the subsequent acts which seemed out of balance to the rest of the cast?

From curtain up the ensemble cast is excellent. The tight confines’ of the ships’ quarters is portrayed skilfully by the male ensemble who spend the first act closely wedged together, while still producing wonderful sounds. The women created a particularly beautiful chorus in Act II, along with a fun sense of camaraderie. Dispute its often sombre tone, there was room for jovial dance sequences and even some more cheeky moments. The crowd scenes and celebrations were presented with a bright and modern ambience. The most dramatic moment of all was defiantly the ghostly seaman of The Flying Dutchman! Spine tingles all-round. 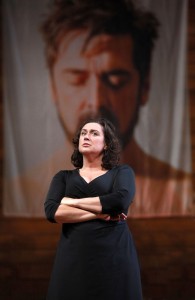 I was immensely impressed with the set design and costumes that present this story in a contemporary style, with only the Dutchman remaining in traditional costume. The production plays out on a huge stage that soaks up the drama of Wagner’s score using large modern pieces. There were many surprises within how the story was presented to us and I enjoyed the unexpected twists and turns of the set, props and apparel. Not many productions could feature avant-garde, stylish and haunting imagery in such a well imagined way.

I found The Flying Dutchman to be a more challenging watch than the previous shows I’ve seen from NZ Opera. However I still found it to enjoyable with some excellently detailed and dramatic theatrical maneuvers. Definitely changed my perception of what to expect at the opera!

The Flying Dutchman is on at ASB Theatre, Aotea Square until 12 October.