Set in 1920’s Chicago, Cook County Jail houses many murderesses, including Velma Kelly and Roxie Hart. Having murdered their husbands or lovers these ladies are serving time, trying to stay off death row and all the while trying to get their piece of the media spotlight; All beautifully puppeteered by lawyer Billy Flynn.

I was instantly excited to walk into the theatre and see we were going to experience the show in-the-round. With a smoky air, and a packed to the rafter’s audience, you really feel that West End vibe. This versatile space allows for this show to flex it’s Auckland muscles.

There’s a big buzz around this show, and the hype is to be believed. You will see something very different from what you’d expect from this well known musical. 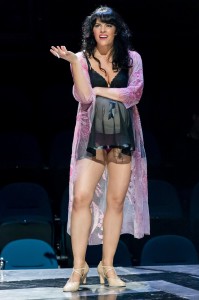 Highlights for me were the performances of big numbers such as Cell Block Tango, We Both Reached for the Gun and a version of Razzle Dazzle that has enough bling to be Vegas worthy!

Costumes are more garnish than outfits for most. Skimpy isn’t the word! However everyone is perfectly styled and there’s a smooth synergy in the overall look. There are also beautiful gowns and show girl attire. Obviously the whole cast is gorgeous and able to pull off this overtly sexy look and choreography by Shona McCullagh.

Lots of tricks are pulled out the hat which continuously titillate and surprise throughout the show; The audiences proximity to the cast mean that it’s easy to be carried along with the Chicago madness with lots of whoops, cheers and gasps bounded around the theatre during the two hour show. The show is up close and personal so if you are in one of the first few rows expect to get to know the cast well. 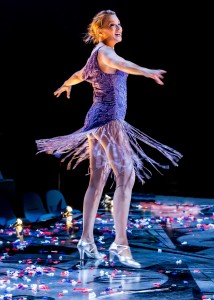 Vocally there are no weak links but my noted solo performances were from the sexiest Mama I’ve seen, created by Colleen Davis, and a wonderfully touching performance as Amos Hart from Andrew Grainger, whose solo song ‘Mr. Cellophane” got one of the nights biggest cheers.

Our two leading ladies, Amanda Billing as Roxie Hart and Lucy Lawless as Velma Kelly, are a great double act and have plenty of moxy! Roxie’s playful relationships are flirtatious and cheeky. I especially enjoyed the interactions with her hapless husband Amos. Velma kicks off the show and remains a power throughout. There’s nothing innocent or demure about these ladies. Both are stars in there own right and share the limelight equally in the shows success.

Most memorable theatrical entrance of the year has to go to Shane Cortese as Mr Billy Flynn! (sorry no spoilers).

The musical direction by John Gibson, is updated and allows for sounds other than Chicago Jazz, mixing in heavy guitars, funk and soul with modern styles into the more traditional mix.

Congratulations have to go to Michael Hurst for creating this sexy spectacle of murder, money and media manipulation. From swinging corpses to gender bending you’re sure to have a memorable evening. Auckland Theatre Company’s Chicago is a confronting, sassy, crotch flinging show with twerks to make Miley blush.

The Vodafone season of Chicago is at Q Theatre until 15 December.