Last night saw the biggest night in Kiwi music, the Vodafone New Zealand Music Awards. The 48th annual awards show took place in Auckland’s Vector Arena in front of musicians, fans, media and industry big wigs. The red carpet featured appearances from Fat Freddies Drop, Rachel Hunter and Ruby Frost with the photo of the night being of the now global success, Lorde, who was absent from the red carpet. 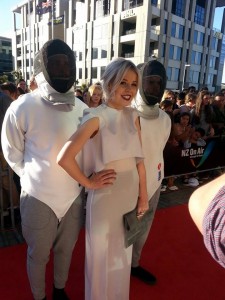 Ruby Frost styled the fencing look on the red carpet

The ceremony was kicked off by the new queen of Kiwi music who delivered a charming and pitch perfect performance of Royals. She won four awards; Single Of The Year ( Royals), Vodafone People’s Choice Award and received the International Achievement Award. She was an impressively professional and mature young woman and it’s easy to forget that this is a 17 year old from the North Shore.

Hosts Stan Walker and Shannon Ryan then took control of the evening proceedings that would see performances from Titanium, Jamie McDell, Aaradhna and Ruby Frost. After a slightly shaky start the ceremony was excellent and definitely felt flashier, bigger and better than previous years.

Stan Walker did an excellent job presenting and came across as a man of the people. His performance at the end of the night was a real show stopper! He too went away with a Tui –  NZ On Air Radio Airplay Award for ‘Take It Easy’. 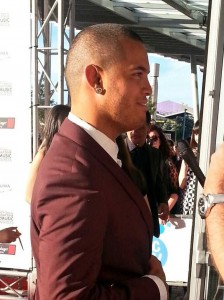 Stan Walker before the awards

Shapeshifter and Aaradhna had the most nominations for Tuis with five each. Aaradha won three awards Mentos Album of the Year, Spotify Best Female Solo Artist and Best Urban/Hip Hop Album. She also gave one of the standout performances of the night. Shapeshifter took the Tui’s for Steinlager Pure Best Group and George FM Best Electronica Album. 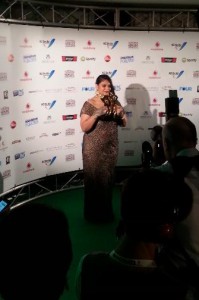 Winning his first Tui was Lawrence Arabia for Best Male Solo Artist and Bret McKenzie accepted the award for Flight Of The Conchords ‘Feel Inside’, which received Biggest Selling Single.

The evening also featured a tribute to the recipient of the NZ Herald Legacy Award, Shona Laing with a tribute from Ruby Frost who sang ‘Soviet Snow’ and ‘Glad I’m Not A Kennedy.’

The shining star of night was Lorde and it felt like a whole nation swooned with pride. 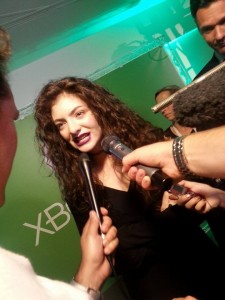 Lorde dealing with the media after the awards

For all our red carpet snaps go to our Facebook page.