Cuban Fury sees Nick Frost of Shaun Of The Dead, Hot Fuzz and The Worlds End fame don a frilly shirt and get funky on the dance floor.

This Salsa comedy follows Bruce Garrett (Nick Frost), who at the age of 13 was a dancing superstar but in his thirties is overweight and under loved. He lives a simple life away from the glitz of salsa now working as an engineer. Like Strictly Ballroom and Dirty Dancing before it, there has to be a romance and there has to be a bad guy.

The love interest is his new boss Julia (Rashida Jones) a beautiful, American and a fan of Salsa. Upon realising a shared passion for Salsa he decides to pursue the seemingly impossible dream of love with the support of his barmaid sister Sam (Olivia Coleman). The course of true love never does run smooth and Bruce goes heel to heel with love rival and work colleague Drew (Chris O’Dowd). 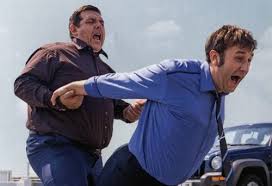 It’s a heart warming tale but of a not so original underdog story . However the endearing nature of the characters and cast make it a great watch with more than its share of laughs. Frost and Dowd have some wonderful moments culminating in a rather special stand-off, which also features one of the best cameos I’ve seen in a long time (no spoilers). Dowd gets to be the bad guy, and a truly repulsive character he is too, the perfect hip swivelling rival.

The other great addition to the cast is he OTT Bejan, played by Kayvan Novak. Bejan is allows Bruce to bring out his inner Salsa gods and is filled with funny one liners and colourful camp. If you went to Splore this year you may be interested in the cameo of The Cuban Brothers too.

The plot is somewhat predictable, but the excellent cast embrace the story making Cuban Fury a feel good fun film which will make you chuckle and smile throughout.