Set in 1985 New York in Reagan’s America, the play constantly chips away at the era that produced ruthlessness, greed, selfishness and right wing success and turns a mirror on the characters as they grapple through their lives. There’s a new plague in town, and one that will touch the lives of all the characters.

Prior and Louis are a seemingly happy couple until the devastation of AIDS takes over. Harper and Joe are a not so blissfully wed Morman couple. Joe spends her paranoid days popping pills and hallucinating,  while Joe is carrying around a lie and trying to be a ‘good person’. Roy is a lawyer of rather questionable morals whose illness won’t event push him out the closet. Belize is a camp ex drag queen, and Prior’s ex-lover, who brings a lighter and humorous side to the craziness surrounding him.

The three hour show stars eight excellent actors playing numerous parts, which sometimes requires them to play the opposite sex. It’s a demanding piece of theatre that involves very quick scene changes and a rotation of characters. Silo’s set is a bleak and non distracting black surround, with only the subtly of black gloss paint dripping downwards as decoration. Other props and lighting are brought on by the cast in this excellently choreographed carousel of direction. The real world and the spiritual intertwine throughout the play, allowing the characters rest bite from their living pain. 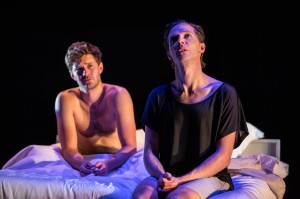 Tony Kushner’s colourful and intense writing makes this a demanding watch and one that I am sure you will gain more from the more you see it. However, its complex political messages and rationalisations may be too much for some.

The story is raw and graphic and this production shows, with no holds barred, the impact and effect of HIV and AIDS. That said it still manages to be very funny, even hilarious at times. This may be heightened by the tragic circumstances of the characters. The script is incredibly quotable and fans of the show/TV series will have a favourite, but I won’t give any spoilers here.

The whole cast is fantastic, but Stephen Lovatt is truly addictive as ruthless lawyer Roy Cohn and completely hilarious as a ghostly ancestor of Prior Walter. Gareth Reeves is playful with the wry wit of Prior, while also maturely and sensitively portraying sickness and heartache. This results in a performance that is confronting and honest. Jarod Rawiri provides some much needed OTT humour as his pops up in various hallucinations and plays friend, nurse and confidant Belize, a character I look forward to seeing more of in part two. Alison Bruce shines as she pulls off some brilliant transformations playing a wide variety of characters.

This Silo production is a slick, modern theatrical wonder bringing the Angels in America saga to a whole new audience. Bring on part two!

Angels in America is on at Q Theatre until 13 April with part 2 starting on 29 March.