The now much talked about Silo Theatre production of Angels in America has now opened Part two: Perestroika; including the first marathons of the full seven hours of Tony Kushner’s play at Q Theatre.

Having got to know the characters and been exposed to some raw and graphic scenes in Part One, I found the continuing story addictive, with the religious and biblical retrospection stronger than ever.

Silo’s production is slick and perfectly executed. As I said in my review of Part One, all aspects – set, lighting, direction, music and performance are very admirable. It’s difficult to imagine the energy required by the cast to perform this play, but they do it so consummately and with aplomb. A brave but successful execution of theatre by Shane Bosher.

The cast are truly phenomenal. Our main protagonist, Prior  is having somewhat of a religious awakening thanks to a special visitor. Another impressive performance from Gareth Reeves that allows for humour, sympathy and the best of the human spirit. Again Stephen Lovett excels at the villain Roy Cohn, a truly repulsive man who he really gets his teeth into as he portrays the physical and emotional demands of a dying and sick man. Alison Bruce is extremely versatile and gets to spend more time as one character in Part Two, so we see her build relationships and rift off the others in the play. She is flawless as mother figures Hannah Pitt and Ethal Rosenberg. Dan Musgrove’s portrayal of the neurotic and idealistic Louis is emotionally bare, and yet still witty and fun. 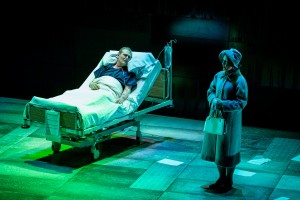 The spectacular arrival of Mia Blake as the Angel is both intimidating  and divinely hilarious. She looks serene, and moves  balletically allowing for some well performed choreography. I very much enjoyed watching Harpers journey,where Chelsie Preston Crayford excellently portrayed the heartbroken Mormon wife. She has grasped the sadness of the character and subtly builds from the rock bottom of imagination to climbing back up to reality. Matt Minto too shows a whole new side of Joe allowing him to push through his emotions and deal with his demons .As I hoped we got a lot more of Belize, played by Jarod Rawiri. He was a joy to watch for both the humour and the kindness he projects. Jarod also displays some wonderful movement and swagger when he appears in Harpers hallucinations.

Angels in America is a play that will make you think long after its closing, and I have found myself wanting to hear the many quotable monologues again since.

This is a unique and special theatrical experience where Silo have proved to be triumphant. It’s an illustrious exploration of ideas around religion and society and an important introspective, and occasionally uncomfortable confronting piece of theatre. Bravo Silo!

Angels in America, Part One: Millennium Approaches and Part Two: Perestroika are on at Q Theatre until 13 April.