Thomas Sainsbury’s Sunday Roast is a black comedy that puts a gruesomely absurd twist on the traditional kiwi end-of-week feast.

Sunday Roast is delivered by two of Silo Theatre’s finest actors, Toni Potter and Adam Gardiner. They portray the lives of eight family members who all compete for a piece of the bizarre Giles family legacy.

Directed by Sophie Roberts, this production is not for the righteous vegetarian (or the humanitarian for that matter) as it features some awful human beings who engage in some awfully meaty practices. The production takes aim at the entrails of kiwi values and turns them inside out providing the audience with some amusing and relevant comedy whilst putting the microscope on modern family dynamics.

The whole story takes place on and around the Giles family farm as Father, verging on multiple stokes and/or heart attacks, looks to pass on his legacy to the most fitting member of his family. Each of the eight characters played by Street and Gardiner have their own opinion as to why they are the obvious choice to inherit the farm. They each reveal their own chronic neurotic disorders with severe hilarity. 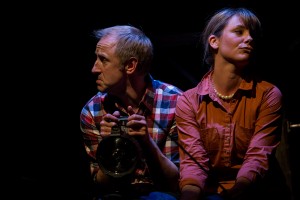 The set design is basic but provides enough of a visual platform for the characters to launch in and out of their various roles.

The level of skill required for this production is incredible, as both actors often jump between four different characters at one time.  They are very expressive in their performances, Gardiner even plays a few female roles with conviction and Potter is inappropriately charming as the promiscuous granddaughter Tamsin.

Sunday Roast is funny and shocking, which is exactly what makes a decent black comedy. Thomas Sainsbury has done well to write with such wicked imagination, and has produced a story that appeals to even the sickest sense of humour

Silo’s Sunday Roast will be at Q Theatre, Auckland until 28 June.