TEDxAuckland 2014 has announced it will be returning to the city for its third consecutive year this August.

Designed to inspire Aucklanders through storytelling, sustainable-thinking and innovation, this year’s think-fest will be held on Saturday, 16 August at the Aotea Centre. The event will celebrate the resilience and courage of individuals who are making the world a better place through this year’s theme, Ascending.

Amongst the 10 speakers already secured for the event are Nelson Mandela’s former chief of security, Rory Steyn;  New Zealand adventurer and author, Mike Allsop; and sustainability expert Rebecca Mills, who has been working with Sir Richard Branson and Derek Handley at The B Team.

TEDxAuckland organiser, Elliott Blade, aims to build on the momentum of the previous two events and further strengthen the relationship between New Zealand and the TEDx platform.

“Since TEDxAuckland launched, the event has started to introduce the idea of TED at a local level, and has focused on kiwi thinkers and world-changing ideas. This year we are adding a selection of international speakers to the mix.”

“With further speakers to be announced over the next month, this year’s event is looking to be one of the best yet,” says Blade.

Speakers already confirmed in this year’s line-up include: 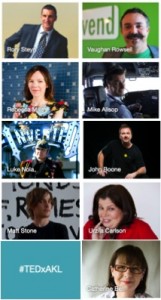 Mike Allsop – Inspiring kiwi adventurer who has survived a plane crash and run 7 marathons in 7 days on 7 continents. He recently returned from a marathon around Mt Everest