Florian Habicht is in Auckland ahead of the screening of his film Pulp: a Film about Life, Death & Supermarkets at New Zealand International  Film Festival. This intimate tale of a band and their home city is not your standard rockumentary. It presents a story of community, belonging and, well, the common people.

We were lucky enough to get a few minutes with Florian to have a chat about the film, and the band.

How did the film ‘Pulp: a Film about Life, Death & Supermarkets’ come about?

“My film ‘Love Story’ was screening in London, and Pulp are one of my favourite bands… when I was thinking about who can I invite I thought I should invite Pulp. I had a friend in a band in London who got me contact details for them.

I planted the seed of the idea for the film in my email to Jarvis, what I didn’t know was that he also had ideas about a Pulp film. When we got together and had cups of tea for the first time, the spirit of both of our visions for this film were almost identical. We wanted to make a non conventional rockumentary, we wanted to do something different;  a film about the people.”

There is a strong music vibe at this year’s NZIFF. What do you think draws us to musicians?

“I guess ’cause when you hear music you really love, you paint your own pictures, and your own imagination takes over. I guess there is a human curiosity to see what they are really like. Musicians become like your friends. When you listen to a song in your headphones it’s very intimate, you can’t get much closer.” 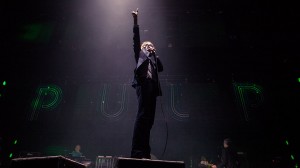 The people of Sheffield are as much the stars of this film as Pulp, how did you choose them?

“We met them spontaneously on the street. When you edit, you watch things over and over again, so the things that stand the test of time are the ingredients that end up in the final cut. Jarvis suggested I go to Castle Market, and that’s where we met the people to film the ‘Help The Aged’ scene. I just had the idea to recruit people from the streets of Sheffield.”

How much does Sheffield love Pulp?

“There’s a Pulp audio tour you can do, there’s some of Jarvis’s lyrics written on one of the buildings, there’s Pulp graffiti. The city of Sheffield is really proud of them [Pulp]. I ddefinitely felt that.”

What are your favourite Pulp songs?

“Dishes, Death Comes the Town, This is Hardcore, Birds In Your Garden”

What are Pulp up to now?

“They’re all creative people, and they’re all working on projects. Jarvis is making his own film, Steve Mackey is djing with Arcade Fire, Mark Webber is writing a book on American Experimental Cinema. And they’re touring with the film. I’m meeting Jarvis in LA in a week and touring to New York. We’re going to have a Pulp karaoke contest on a roof top in New York!”

How would you sum up the film?

“Its a portrait of the place, the city of Sheffield that gave birth to Pulp and how the two feed off each other. It’s a huge celebration of Pulp, and a big thank you to Sheffield. “

You can see Pulp: a Film about Life, Death & Supermarkets in Auckland 24 and 25 July at The Civic and at other screenings around the country for the NZIFF.