We love a good horror film, and David Robert Mitchell’s It Follows is just what you need to get your traditional horror fix. After its world premier at this year’s Cannes Film Festival it is great news that it arrived on our shores for NZIFF.

The main protagonist is 19-year-old Jay, a pretty blond who has a seemingly innocent sexual encounter with her boyfriend. However, she soon discovers there is a deadly consequence to her moment of lust. It’s a simple premise, she had sex and become ‘cursed’ to be followed by a slow walking entity that takes the form of a person, even a loved one or someone she might know. She will be followed by this mysterious creature until it ‘gets her’ or she passes it along to someone else via some more bump and grind. Along with her friends, Jay must find a way to escape this waking, and indeed walking, nightmare.

With its John Carpenter inspired electronic soundtrack, and sweeping shots of middle-class suburbia, It Follows is reminiscent of many classic 80’s horror; including Halloween and Nightmare on Elm Street.  As we all know, all killers in classic horrors walk menacingly slowly, so It Follows uses this beautifully to create the perfect creepy dead-eyed enemies. It never matters how fast you move away from this type of goulash figure, they will always eventually catch up with you. 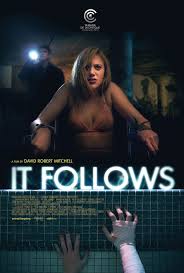 The film also utilises another of the classic scary movie rules, you should never have sex! With the curse being transferred from person to person by intercourse, you could easily come to the conclusion that the curse is a metaphor for sexually transmitted diseases. It doesn’t matter how much you try to ignore it, eventually you will have to face up to your little companion or it’ll take you down. The film then tackles the next dilemma, the moral question of passing it on to another person either with or without them knowing. With all this drama, it is another big tick that the film also fits in a love story and some witty exchanges within the script.

Another horror trend the film keeps from it’s creepy predecessors is its cast of unknowns. There are really strong performances, and none stronger than the leading lady Jay, played by Maika Monroe, who stands out as the tormented teen.

Although this film has it roots deeply embedded in past vintage horror, this is a fresh vision and breaths new life and originality into this much clichéd genre. It was refreshing to feel terrified and not be constantly confronting with blood and gore.  A step back in the right direction.

It follows is tense and unnerving from begin to end. It will leave you with that look over your shoulder feeling (and a little more chaste).