The Last Saint is a dark look at the world of gangsters and the ‘P’ (Methamphetamine) culture that is so sadly abundant in Auckland city.

Writer/director Rene Naufahu brings us the fictional story of Auckland teenager Minka, played by Beulah Koale, who lives with his ‘P’ addicted mother. After running out of money to support himself and his mother, Minka turns to his estranged father Joe, played by Calvin Tuteao (Top of the Lake) for help. Joe is a strip club owner and drug dealer, and he takes his son under his wing, which inevitably introduces Minka to the seedy criminal underworld.

The film does not for one minute glorify the dark under belly of inner city crime and struggle, but it does make you confront it. It’s hard to accept the truths of certain parts of our society, even if it is right under your nose. The story is not overly original; a young man trying to make good in a bad world, but it’s refreshing to see a Kiwi take on this much Americanized genre. 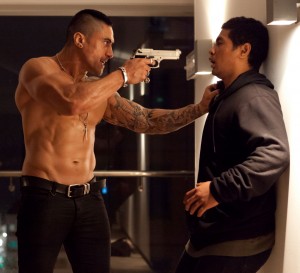 Joe Naufahu as Pinball and Beulah Koale as Minka

Beulah Koale excels on the big screen, while tackling this emotive and provocative tale. He shows a broad ability to communicate with subtly and sensitivity this desperate boys story. Joy Vaele gives an authentic performance as Lia, Minka’s drug addicted mother. Calvin Tuteao has a tough job to illustrate Joe’s relationship with his son, but delivers an impressive on screen character.  Joe Naufahu plays the terrifying ‘Pinball’ a paranoid psychotic drug dealer. His performance is aided by his intimidating appearance, and he dominates the screen. Sophia Huybens plays ‘Zoe’ who becomes a love interest of Minka. She portrays a strong female character who has a very feisty personality.

The film’s atmosphere is complemented by the strong kiwi soundtrack, which features Hip Hop artist P-Money. Overall this is a slick production with some disturbingly realistic fight sequences.

What makes this films story even more incredible, is it’s own fight to make it to the big screen. The film maker was refused  funding at the script development stage so had to turn to private funding, which was championed by the support of the late Sir Paul Holmes. The film makers have also created their own company to act as the  films distributor.

This is a film with a lot of blood, sweat and tears behind it, with the producer and director hustling like their characters on screen. A dark, and possibly polarising film, but one that Kiwi’s should be proud of.

You can see The Last Saint from 28 August.