The London Palladium production of The Sound Of Music is everything you want it to be; exquisite sets, beautiful costumes, stunning performances and those well known ditties that bring childhood memories flooding back.

With a live orchestra bringing the much loved Rogers & Hammerstein score to life at Auckland’s Civic Theatre, this production is pitch perfect. Coupled with the fabulous sets that allow for absolute escapism to the Austrian mountains, The Abbey and the Von Trapp’s lavish mansion, and you have a winning combination.

Reprising her role at the Mother Abbess, Lesely Garrett brings her powerful yet beautiful and precise voice to wow Auckland audiences. Her ‘Climb Every Mountain’ is truly epic and a real highlight of the show.

Fans of the 1965 film will find no fault in Bethany Dickson’s Maria, she totally embodies what we want from the character; likeability, naivety, youthful enthusiasm and more than a slight resemblance to Julie Andrews herself. Not only does she have the perfect look, but her performance proved her to be the perfect voice too. Her opening number ‘The Sound Of Music’ sets the bar for this very enjoyable journey. 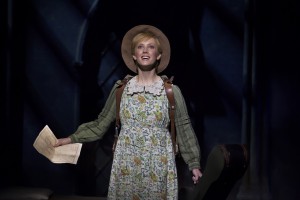 The charming Captain Von Trapp is played by Mark Rayment, who performs an excellent emotionally charged ‘Edelweiss’ in front of a confronting Nazi backdrop. His romance with Maria is a warm and authentic courtship, and we even cheered when the couple finally kissed on stage!

As with ‘Annie’, which played at The Civic earlier this year, the kids where cast here in NZ, with the exception of Liesl played by Carmen Pretorius. Their utterly charming performance of ‘So Long, Farewell’ is wonderfully choreographed and delivered with playful precision. The Von Trapp children were played on opening night by Matthew Turner as Friedrich,  Sophie Parkinson as Louisa , Jaxson Cook as Kurt, Tara Canton as Brigitta , Melody Lui-Webster as Marta and Ella Robertson as Gretl. They are a triumph of both the local talent and this production. Pretorius’s youthful innocence as Liesl is spot on and this culminates in the song ‘Sixteen going on seventeen’ along with love interest Rolf, played by Rhys Hewitt Williams.  Always a firm favourite in my book.

The Sound of Music is a family classic, and this production transports you with it’s iconic numbers, extravagant sets and top notch performers for an evening of unadulterated musical indulgence.

The Sound of Music is on at The Civic Auckland until 26 October.