On the last leg of its New Zealand tour, Hiraeth is now playing in Auckland at the trendy Basement Theatre. The award winning production, supported by British Council NZ and produced by Show Pony is an honest and comedic telling of the life of a Welsh farm girl Buddug “Bud” James Jones through her late teens and early 20s.

Performed with only a few key props Hiraeth (pronounced … hee ryth… ) is primarily an illusion created by actors David Grubb, Buddug James Jones and Max Mackintosh. Though they had little in the way of a set they truly didn’t need anything more than themselves and a few onomatopoeias; kudos goes to Mackintosh for his versatile portrayal of several different characters and constantly evolving accents, including one Portuguese pantomime. Not only did they act superbly during scripted scenes and monologues, but both Bud and Max also rolled with the improvisations and broke the 4th wall of theatre smoothly with their out-of-character narrations. Not forgetting David Grubb of course whose shy, leery character role roused much laughter and whose fiddle playing was, as far as we know, delightfully on point. 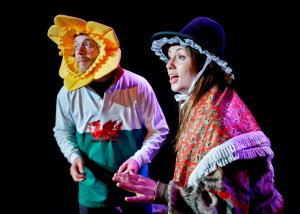 While depicting the life of Bud, Hiraeth draws parallels between her life and that of many young people across the United Kingdom and indeed New Zealand that run from rural family tradition to chase their dreams of urban living and “ooniveristy”. It brings to light the often hidden world of country living with stereotypical ancient views, and by poking fun at Welsh culture and teaching us all what it means to be Welsh. But don’t fear the foreign content; it has been ingeniously adapted for NZ audiences, making it a kiwi friendly show that incorporates so much comedy you’re bound to “lol” at one point or another.

In addition to the sheer excellence in the production, direction and performances, the stage lighting was clever, simple and to the point. Tom Ayres’s use of striking spotlights transformed moments of intense monologue to self-referencing with fluidity and style. Hiraeth certainly lives up to Flight of the Conchord’s star Jermaine Clement’s opinion that you should “see this if it comes near you”. It is performed with gumption, gusto and guts and it will have you guffawing into your Welsh cakes for days to come. You will leave asking yourself the deeply introspective question of are you a rock or a river? But of one thing you will be entirely certain; THIS IS ART.