This week Auckland swooned at the legend that is Quentin Tarantino as he attended the NZ Premiere of his eighth film and second Western, The Hateful Eight. Fans and journos weren’t disappointed as Tarantino, alongside Kiwi Zoë Bell who stars in the film, spent over an hour meeting, selfie-ing, signing and interviewing prior to the screening. On top of that, both stars personally introducing the film with Tarantino quipping ‘I’ve wanted to come to New Zealand since I knew there was a New Zealand. Which was last week.’ So, after all the excitement what did we think of the film?

The Hateful Eight takes place sometime after the American Civil War and features the usual Tarantino intertwining relationships as a group of strangers find themselves trapped at Minnie’s Haberdashery, a stagecoach lodge, during a ‘white hell’ blizzard in Wyoming. But, is everyone really who they say they are? Bounty hunters, soldiers, a hangman, a prisoner, a cowboy and a Mexican… what could possibly go wrong?

The film opens with a wide shot of the desolate winter landscape of Wyoming. Shot on film in 70mm these vast landscapes look beautiful. So, I’m not sure why the majority of the film takes place inside a cabin? Either way, the film looks breathtaking when we do get outside to that epic scenery.

As expected, there’s an ensemble cast featuring many actors from previous Tarantino outings. Kurt Russell is perfectly cast as the no-nonsense bounty hunter John Ruth, sporting the most fantastic epic moustache. Michael Madsen is back as a gravelly voiced cowboy and Samuel L. Jackson doesn’t put a foot wrong while he delivers a hypnotic performance as Major Marquis Warren. 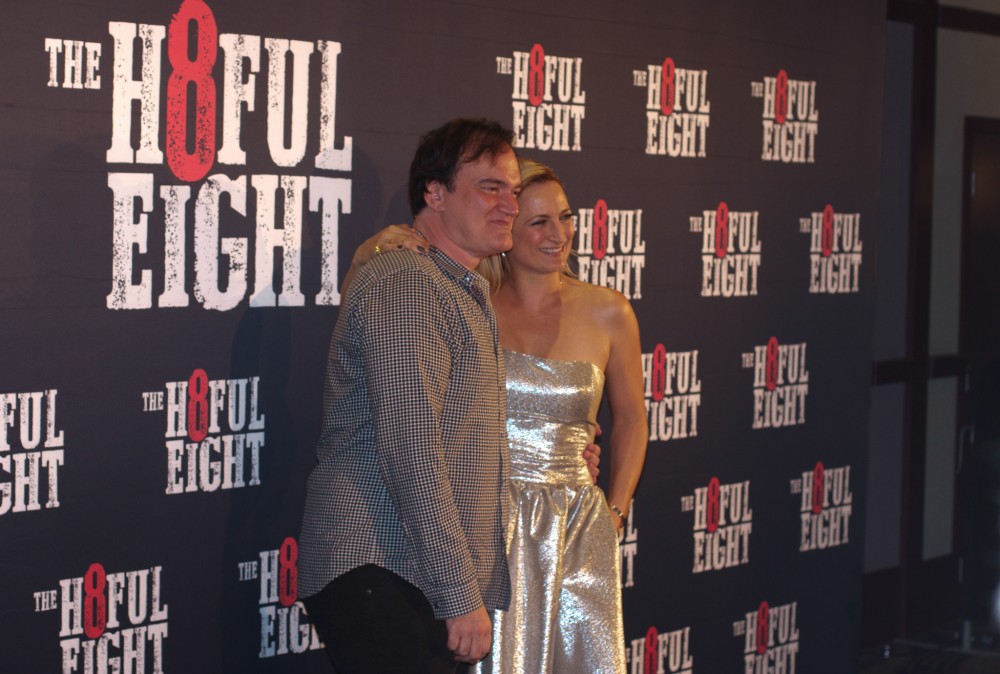 Jennifer Jason Leigh plays a captive Daisy Domergue who she conveys as a mysterious and impish women who we just know is going to have lots of tricks up her sleeve. Walton Goggins, as Sheriff Chris Mannix, is perfect as the southern rebel turned law enforcer. But the standout performance goes to Tim Roth as Oswaldo Mobray, who claims to be the hangman of Red Rock. Quirky in all the right places, but leaving us with an air of wariness for this well-spoken Englishmen. Finally, we mustn’t forget that Auckland’s very own Zoë Bell appears as the bubbly Six-Horse Judy, a Calamity Jane type and sort of blatant ‘easter egg’ for fans.

The unseen star of this movie is the powerful soundtrack composed by Ennio Morricone whose previous credits include ‘Once Upon a Time in the West’ and ‘The Good, the Bad and the Ugly’.  This is the first time Tarantino has used an original score which is now nominated for an Oscar. However, you may know that he also likes to use music from other films, and The Hateful Eight is no exception, as he has included previously unused Music from ‘The Thing’ also composed by Morricone.

Westerns have always reflected the era that they were made and The Hateful Eight definitely features topics that mirror the general rhetoric in the United States today. With race inevitably forming part of the plot, the script delivers a few hard hitting statements that still fit pretty well today despite the progress we would have hoped for. Walton Goggins’ character Chris Mannix delivers the very poignant “When black folks are scared, that’s when white folks are safe”.

One Tarantino trademark that we know and love is his non-linear storytelling. Previously this has worked really well but sadly here it felt a bit jarring and added nothing to the suspense of the last chapter. This cabin based ‘who done it’ has a  long-winded wind-up to the final punch which at times felt a bit like a western version of Columbo.

Tarantino fans will revel in the moments of brilliance but sadly they are sparingly spread in the first half of the movie meaning that The Hateful Eight saves too much of the great stuff for its finale.

The Hateful Eight delivers sparks of genius, great one-liners, gunslinging, blood and n-words, it’s Tarantino through and through.