Cirque du Soleil filled Auckland’s Vector Arena with laughter and awe at last night’s opening of Quidam. We witnessed amazing physical feats of strength and agility that brought as many gasps as they did cheers.

The spectacular show is presented on a huge revolving stage with the live band set to the back. A skyscraping arch of chrome rigging shadows over the performers and allows for props to be elegantly delivered and aerial acts to perform some breathtaking stunts. The underlying story is around a little girl, Zoé, whose curiosity transports her away from her childhood home into the crazy world of Quidam and Alessandra Gonzalez delivers a beautiful vocal performance as Zoé.

The two show-stoppers in the first half were the Aerial Contortion in Silk and Skipping Ropes. Julie Cameron wowed the crowd with her strength and grace as she climbed, fell and contorted high above the stage wrapped in dramatic red silk and accompanied by equally dramatic music. Norihisa Taguchi, Kata Banhegyi and House Troupe made skipping extremely entertaining and wonderfully fun choreography made it a joy to watch. 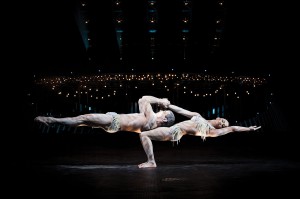 The big guns, however, were reserved for the second act. Statue was performed by Alexander Pestov and Natalia Pestova and the audience’s reactions of ohhhs and ahhhhs were audible throughout. The crazy strength and precision of this couple’s act meant that they never lost contact with each other and balanced on each others bodies to create seemingly impossible yet impeccable balancing poses.

Sean Kempton brought us the highlight of the night with his Clown Cinema. This audience participation piece is pure fun and joy and had us all in tears of laughter, and feeling very glad it wasn’t up there on stage. Fair play to those who were, as they were excellent ad-hoc entertainers perfectly puppeteered by Kempton.

The finale did not disappoint; The Banquine saw fifteen artists perform insane acrobatics and human pyramids. Bodies flew around the stage like they were as light as a feather landing perfectly and elegantly in this seamless flow of circus agility. A wonderful sight to witness.

Quidam is packed full of exciting acts and atmospheric music. I was worried at first that Vector Arena would not produce the same atmosphere as the big top, and I think it did take the audience more time to warm up, but ultimately we had a great night and the performers gave us a dramatic and entertaining evening.

Quidam by Cirque du Soleil is on at Auckland’s Vector Arena until 14 February and Horne Castle Arena in Christchurch 17 – 26 February.