There’s been lots of excitement leading up to the Briefs boys from Aussie taking over Q Theatre this year, and you can certainly believe the hype.

This all male cabaret show is bursting with fun, comedy, athleticism and some real treats for the eyes. Described as ‘boylesque’ Briefs showcases a range of talents that include hula hoops, trapezes, fantastic costumes alongside many other hugely crowd-pleasing moments too! I’m very reluctant to give anything away as presents are always more exciting in the wrapping so I’ll list some adjectives that you’ll no doubt use after watching Briefs.

Yes, it’s pretty funny and my cheeks hurt from laughing. There’s great characters and big surprises, especially when performances went down a totally unpredictable path –  much to the delight of the audience. Evil Hate Monkey probably get’s the most laughs but I really can’t spoil his exploits here.

Along with all the tongue in cheek fun, there are some pretty epic performance pieces of physical skill and strength delivered with grace and precision. Thomas Worrell will give you the wow factor and there’s no doubt that the epic finale from Mark ‘Captain Kidd’ Winmill will totally blow you away. 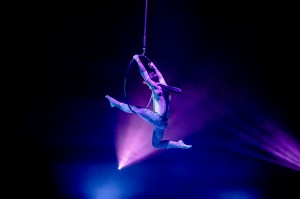 Dallas Dellaforce brings a big splash colour both in performance and in the costumes she’s created for the show. Bright, colourful and oh so very naughty.

There’s plenty of phwoar moments from these wonderfully well turned out men who work their butts off to create a show of masculine energy and cheeky audience interactions. Louis Biggs proved particularly popular demonstrating many a surprising talent during his stage appearances.

All in all, this is just a purely entertaining and fun night out. The unpretentious atmosphere is cultivated by the wonderful MC Fez Fa’anana, whose genuine warmth radiated through the crowd. I URGE you to buy a raffle ticket during the show as the prize is totes worth it.

Grab some mates and get out on the town to see Briefs, it’s the most fun you can have with your clothes on (while they take their’s off).

Briefs is on at Q Theatre until 10 December.