Say Something Nice is essentially a seminar that forces you to reflect upon the concept of being nice. The audience sits at desks equipped with a pad, a pen and a blank envelope. A projector at the front of the room becomes the sole focus of the show as ten tasks are typed up periodically to complete, all to do with the concept of ‘nice’.

The audience is eased into the format as the first few tasks asking for words that you think are nice (genuine, generous), a celebrity you think is nice (Anna Kendrick) and someone who is nice to you (my mum). As we venture deeper into the show the tasks require more self-reflection, it was when we were asked to write a few sentences about our childhood hero that my mind went blank. It wasn’t something I had thought about in a long time and made me wonder how much I had valued niceness growing up or if I had taken it for granted. 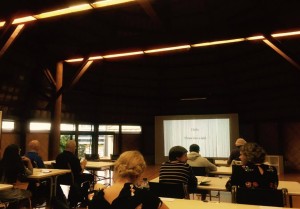 The message Brook’s seminar delivers is apparent and typed up in black and white on the projector; people shouldn’t be nice, they should ‘do nice’. As he states ‘thinking nice thoughts does little for anyone, just as yelling “bus” doesn’t help a person who is about to be hit by a bus’.

The final task, which involves the blank envelope, questions why we do not say more nice things to the person we love the most, especially as time is precious. It is in these moments, looking around the room you can see how entranced each of the audience members are as they scribble away their deepest feelings onto the pad.

Although the concept of the show is basic, the idea is delivered in a way that becomes personal and resonates with long after you have left the Samoa House fale. Go and see Say Something Nice  (on until 10 March) for an immersive and reflective experience that will hopefully make your world just a little bit nicer.