It’s not Auckland Arts Festival without the beautiful mirrored Spiegeltent, and this year it’s the biggest ever in Aotearoa! Last night she was broken in for a few weeks of merriment by Olivier Award Winning La Soirée, a wonderfully hilarious circus and cabaret extravaganza that will delight all that have the pleasure of its naughtiness.

La Soirée has toured the world with its brand of sexy acrobats, comedy contortionists and anarchic audience interactions so now it’s Auckland’s turn to join in the fun.

A belter of an opening number by Miss Frisky, and may I add an amazing gold sequin frock, gets the audience right in the mood for the night of fun ahead. This throws you perfectly into the patriotic English Gents who’s feats of strength really do make you feel like a big sack of potatoes (especially when you’re 8 months preggers like me!). I was totally awestruck by each appearance of these talented men on the stage with their perfectly sculpted bodies performing phenomenal lifts and balances. If the gents aren’t enough for you there’s more physical prowess and grace in act two with the hoop trapeze act from Bret Pfister who delivers a beautiful aerial ballet. 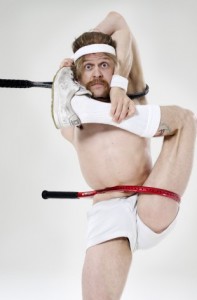 Hilarious Norwegian Captain Frodo was the highlight of the night for me giving pure unadulterated entertainment. In the first half he maneuvered his rubbery body rather clumsily, much to the audience’s delight, through the skeletons of some tennis rackets. Returning in the second half, we were treated to not only a fabulous suit but a rather special balancing act that you really have to see for yourself. His patter is hilarious, his fashion sense spot on and his skill level is world class.

That brings me to the wonderful Ursula Martinez’s act that really has to be seen to be believed. Her striptease come best slight of hand handkerchief trick I’ve ever seen (let’s call it the best game of hide the hanky EVER) it was really rather eye opening and one not to be missed. During her second stage time of the night she delivered much hilarity with naughty Español alongside a right good ol’ Spanish/Croyden singsong . At 50 she’s almost ready to hang up her little red hanky so make sure you catch her in this show so you can see for yourself her unique and much talked about cult act.

Mario, Queen of the Circus really united the audience with comedy, circus tricks and his love of the music of Queen. A man of many talents, Mario won over the whole tent with his jokes and wowed them with juggling, unicycling and general master hood of crowd-pleasing.

This band of wonderful misfits will entertain and amuse with their unique collection of divine and deviant delights. If you only have time or funds to see one show at this year’s Auckland Arts Festival make it La Soirée.

Enjoy La Soirée at the Spiegeltent until 26 March as part of the Auckland Arts Festival.