A star-studded guest line-up and the latest in gaming, cosplay, anime and comics come together to create the largest ARMAGEDDON EXPO in New Zealand history.

Returning to Auckland’s ASB Showgrounds this 20 – 23 October, the 2017 event features the biggest line-up of celebrity guests the expo has ever hosted with stars including: 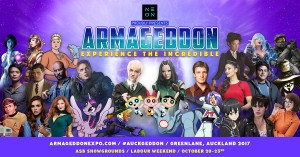 Other activities available during the event are Drive-In Movie Screenings, the Brother Cosplay Contest, Zombie Alley, E-Sports competitions and wrestling among other things.

General entry tickets are on sale now from iTicket. Photo and Autograph tokens for  Nathan Fillion, Tom Felton and John Barrowman. All other guest tokens will be released on September 28th.

The show will continue to host a massive range of exhibitors from home crafted artist alley stalls, collectables, anime merchandise to a number of MASSIVE Gaming and entertainment areas with Disney/Marvel,

So, if you’re a fan of all things pop culture and want a chance to be at AMEGEDDON aka #AUCKGEDDON 2017 then we’ve got some double passes to give away.

THIS COMPETITION IS NOW CLOSED.

For your chance to enter here, simply fill in the form below telling us who you’d be most excited to see at AMAGEDDON EXPO. Please include your postal address. Then head over to the below social media profiles for another chance to win!!!