Velvet is an energetic disco circus barrage of the senses that’s taking over Q Theatre during the Auckland Live International Cabaret Season. From the moment you walk in you are dazzled by a kaleidoscope of multicoloured disco lights and entertained by the bedazzled DJ Accaria as you wait for the performance to begin.

Once the show kicks off, the talented Mirko Kockenberger treats us to some dizzying acrobatics. He really takes the handstand to unimaginable levels with his awe-inspiring balance and strength. Australian breakout Tom Oliver and the fabulous Marcia Hines take their voices to shocking heights to match the acrobatic circus performances of aerialists Emma Goh and Stephen Williams who will literally make your jaw drop with graceful flights over your open-mouthed head. Hines excels on stage with ease; her vocals echo disco, fund and soul as she belts out classic after classic during her note-perfect performance – she’s a show in herself. However, there was still more talent to come when hula hooping master surprised us all with his superb skills and whipped the room up into a hooping frenzy when he turned into a human slinky using several hoops at once. He really is one act you must see with your own eyes.

Keeping the stage alight with funky dancing and even funkier songs are the sexy sirens Kaylah Attard and Rechelle Mansour who belt out the tunes like true divas while awash with fabulously sequined costumes. These ladies just don’t stop; their stamina to dance and sing at such a high energy level really carries the show’s momentum. There may be a slight lull in the shows’ halfway point but Velvet is an overall fun and sometimes rather frisky night out. 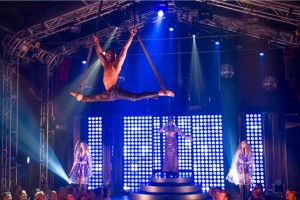 All of the fabulousness is brought together by director Craig Ilot and musical director extraordinaire Joe Accaria who’s the perfect hype man with his Daft Punk-esque Swarovski showmanship. With a standout soundtrack including every disco classic you could hope to hear, from Boogie Wonderland and It’s Raining Men to a re-imagined version of Stayin’ Alive, Velvet is a huge crowd pleaser.

If you love disco, glittering costumes, belting divas and believe there can never be too much camp in one room, then this is the show for you.

Put on your sparkliest dancing shoes for some disco, divas and daredevils at Velvet playing at the Q Theatre until 1 October.