Fans of Taika Waititi’s work will know he’s a genius but does his unique style work in the latest MCU blockbuster?

Thor: Ragnarok is set four years after Thor: The Dark World and two years after Avengers: Age of Ultron. The stakes are high in this one – we learn more about Thor’s messed up family, Odin is missing, Asgard is in jeopardy and many will perish.

The god of thunder kicks off proceedings with a confrontation with Surtur (a fire demon) and results in our first big action sequence, however, this is just a warm-up for our Norsk superhero. Hela, the goddess of death, who’s been imprisoned for millennia, is back and her return means trouble for Thor and Asgard. After losing his Hammer, Thor finds himself held captive on the planet Sakaar where he must win a gladiatorial duel against his ‘friend from work’ The Hulk. If he can survive, he must return to Asgard in time to stop the villainous Hela and the impending Ragnarök which would cause the end to all Asgardian civilization. So, pretty light stuff.

It’s safe to say Taika is stamped all over this film and it’s sweet as bro! Local audiences will be pleased to hear Kiwi-isms, see New Zealanders amongst the cast and have many lols with the naughty sense of humour throughout. If some are worried that the film goes too far on the comedic side, don’t be, it’s actually a perfect blend of laughs, comic book action, and heart. (If you’re a real sweaty nerd, no doubt you’ll be keen to check out and decipher the two post-credit scenes). 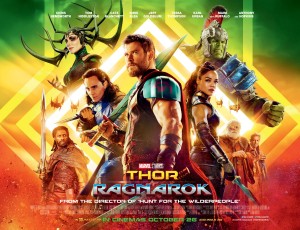 Chris Hemsworth, now very comfortable in the title role, plays a version of Thor that we’ve seen in the teaser promotional short films – he’s a wisecracking, cheeky thunder god but there’s far more to him than that. Hemsworth brings physical perfection alongside his likeable portrayal of this sometimes naive yet courageous god. He can deliver subtlety when needed then flex those Thor muscles for some explosive action when duty calls.

Tom Hiddleston seems to revel in his new-found freedom of having a few jokes and laughs as Loki while having great chemistry with Hemsworth. Mark Ruffalo as The Hulk/ Bruce Banner also gets in a few gags as both the neurotic scientist and while playing a somewhat lonely and bored Hulk forced to fight for the Grandmaster. Jeff Goldblum is perfect as, well, Jeff Goldblum, whose character the Grandmaster is a playfully sadistic leader finding joy in the chaos he creates with a bloodlust for Hulk’s destruction; Spot on casting and pitch-perfect delivery. Hunt For The Wilderpeople’s Rachel House swaps out one authority figure for another as the Grandmaster’s sidekick Topaz and she’s great to watch.

Tessa Thompson as Valkyrie provides the Wonder Woman-esq slow-mo struts and kick ass moments while she gives as good as she gets in the bantz stakes and can sure hold her liquor. Anthony Hopkins returns as Odin and Idris Elba also returns as the hero Heimdall and we’d love to see more of his character in future films. Karl Urban has fun in his role as Skurge and Taika himself is a bit of scene-stealer as rock monster Korg, definitely one of the highlights of the movie.

Cate Blanchett nails it as Hela and is wonderfully wicked. She looks phenomenal and her evil, vengeful character is the right level of scary, sexy and cool. The perfect nemesis for this Norsk god.

The overall look and production design of this film is outstanding and exudes Jack Kirby’s style – the original artist that created Marvel’s Thor way back in the early 1960’s. This truer comic book feel really lets you escape into the film and enjoy it for all its craziness and the colorful action gives out a real Flash Gordon vibe. The soundtrack is epic, keeping you locked into an 80’s retro haze with an electronic synth-based score by Mark Mothersbaugh with Led Zeppelin’s Immigrant Song leading the helm for best fight song ever!

As a director, Taika Waititi has proven himself to be able to bring it for the blockbuster and provide brilliant action alongside a humorous and clever delivery.

Witty, fast-paced, and action-packed AF, Thor: Ragnarok is a triumph for Taika and the true champion of the Marvel Cinematic Universe. We dare you to not have a good time watching this film.