The arrival of The Scottish Play to Auckland’s Pop-up Globe has seen its walls draped in a digital projection of dripping blood and the stage was not short of red splatters at Macbeth’s opening night.

The story of one of Shakespeare’s most famous tragedies, Macbeth is a tale of ambition that turns to blood and blood that turns to madness. But were these mere mortals capable, and indeed culpable, for all their evil deeds or was the supernatural the cause of such a bloody massacre and betrayal?

Opening with the fantastically creepy harmonies of the three witches chanting ‘when shall we three meet again’ evokes a churned stomach and an ominous knowing that nothing good is coming from this story.

Stephen Lovatt plays the ill-fated and ambitious general Macbeth who is intoxicated by a need for power and after a prophecy by the three witches, he intends to have the throne of Scotland for himself.  With more than a little encouragement from his wife, Macbeth soon has the blood of the King on his hands, blood that will continue to flow as he falls deeper into protecting his power and tyrannical rule – while himself and Lady Macbeth descend into madness that’s racked with guilt and paranoia. 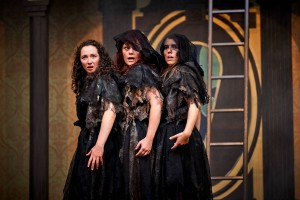 The Pop-up Globe itself is a wonderful way to experience the Bard’s classic plays; Modelled to replicate Shakespeare’s own Globe Theatre, you are transported into the immersive experience of the 1614 theatre. There’s some very satisfying fourth wall breaking which delighted the crowd and despite the dark content, there was even the opportunity for some light relief with some Shakespeare inspired knock-knock jokes. Using the space to the max, the cast enters from every doorway, pushes swords past surprised groundlings and seemingly also intend to drench those in close proximity with any fluids that are being expelled at the time. Epic battle scenes are energetically executed and perfectly choreographed with grunts, lunges, and a violent rage that sucks you right into the action whilst all being accompanied with the soundtrack of bagpipes and a perilous beating drum.

Lovatt goes through the descent into the violent and troubled man surrendering his sanity to inevitable madness with full abandon in what is a very demanding but well-executed performance. His partner in crime was Amanda Billing as Lady Macbeth. She works hard on stage to portray this manipulative and terrifying character for which death and lunacy also looms. However, it was the witches that really gave me the willies and remained hauntingly present with me after the performance. Their menacing melodic prose and hypnotic and inhuman movements were quite mesmerising and fully embraced the supernatural themes within the play. The remaining cast never dips in their energy and enthusiasm to give the audience a thrilling and disturbing ride through this eerie and bloody tale.

Step into the macabre cauldron of Macbeth’s disturbing, dark and gory tale in all its of bloody glory at The Pop-up Globe until 28th February.