It’s back to Basement Theatre for students this year as the creative powerhouse opens its doors for another round of live theatre and educational workshops in its Schools Programme – all at no cost to the schools.

After finding overwhelming success each year since its pilot in 2015, Basement Theatre has again hustled the funds to run the Schools Programme for seven secondary schools across Auckland. Aiming to connect talented grassroots artists with young people and normalise the act of attending theatre, the Schools Programme provides educational arts experiences to secondary school students that may not otherwise get the opportunity.

The Auckland-based theatre is celebrating its 10th anniversary this year, in what the close-knit arts community refers to as A Decade of Disruption. The Schools Programme covers the cost of show tickets and transport to and from its central city location, often cited as a barrier to excursions for schools. As well as specially tailored workshops, free educational resources and post-show discussions give students and teachers the tools to analyse and reflect on what they have seen.

At a total cost of $50,000, Basement Theatre encourages donations and financial support from both the public and private sectors to ensure that the initiative continues to run. 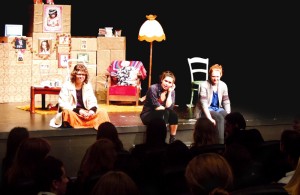 Teachers of participating schools have waxed lyrical about the programme.

“It’s a huge privilege to be able to see live theatre and for me to bring students without any financial burden is really meaningful,” says Onehunga High School’s Head of Performing Arts, Sarah Dillaman.

The Schools Programme consists of a show each term and three in-school workshops. For 2018’s first term, the show staged at Basement Theatre is ‘Side B’, a dynamic series of four new short works choreographed by dance couple Perri Exeter and Joash Fahitua. A continuation of their debut show ‘MIXTAPE’, the concepts are derived from imagination, experiences and moments in time that reflect the contrasting worlds we come from and memories we create as humans.

As well as a yet-to-be-announced show for term 2, Basement Theatre gives its emerging artists the opportunity to tour a show. ‘I Ain’t Mad At Cha’, from the theatre’s 2017 Matariki Season, is a rap musical about a young Maori boy and his affinity with African American culture. The show will hit the road to be performed at the schools in term 3.