Hosted by the one, the only, El Jaguar, the Five Star Comedy Preview is the perfect opportunity to soak up some of 2018’s hottest international acts and as with previous year’s, this show was totally sold out. Paring down the selection to just seven comedians, the preview gives punters a fleshy chunk of overseas funnies to giggle at without becoming overwrought.

Nacho Libre’s brother El Jaguar, who has his own show in the fest ‘Tele Novela’, built the already buzzing crowd into a Mexican fiesta by the time act one began. The swarthy red leopard screamed about the stage building anticipation while taking the gentle Mickey out of those ringside – including a grown man named Billy. You know who you are man-child. 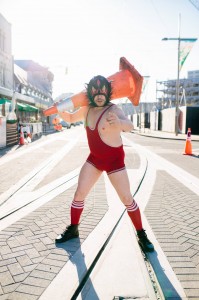 Ian Smith was the first Brit to arrive at the mic. Recounting awkward travels from around the world and hailing from the infamous shire of Goole, Smith’s raconteur skills on husky sledding and interesting running activities made for a gut bust. One of the shorter sets of the evening, Smith did a cracking job warming up the crowd for the barrage of filth to come.

Phil Wang, an understated Malaysian mixed lineage comedian, strutted onto the stage and began to explain his love of fat babies. His deadpan sense of humour drew waves of laughter from the crowd who tee-hee at his curious persona and couldn’t decide whether he was smart beyond his years or a simple tracksuit gangster.

Lauren Pattison was next to dole out laughs and, despite her small stature, held the theatre assertively. She allowed the audience to really zero in on her performance and pay attention to her thoughts regarding the downside of looking young – believe it or not, there are some.

Finn Taylor’s lush British moustache preceded him as he waltzed on stage with an air of what-the-fuckery.  And with one flick of the lip blanket, the audience was quickly driven deep into bleeding orifice territory as Taylor pursues a horrific pseudo-episode of embarrassing bodies. The crowd lapped up the double entendres and the all-too-honest truths about how tough it is being a single male post-Weinstein and the depressive state of being single in general. Taylor’s only weakness is his fast-talking auctioneering. It’s a lot to download initially, but the audience quickly got up to speed with his style and comedic gold nuggets abound.

Then the familiar Lloyd Langford moped onto the stage as if he’d just risen from bed hiding in the wings. Langford, a NZ comedy regular, has an established presence here and has always delivered tear-inducing content at former NZ comedy fests. Welshy Lloyd’s fan base know exactly the kind of filth to expect and this was another notch on his belt-less pants.

Jimmy McGhie rounds out UK proceedings with a set playing to smarter society. A very dapper gent, McGhie deconstructed generation Y, the struggles of baby boomers and the downhill slide of your 30’s. A relevant jokester, McGhie lays waste to healthy fad diets saying exactly what the majority thinks. He’s the kind of guy who looks like he works high profile finance until the moment he opens his gob.

Finally, all the way from the land of Green, Andrew Maxell, the Irish Itinerant, who took the mic on a journey of outsider observation. Winning easy audience points, Maxwell fires shots at Australia and their amusing media circus before bringing the evening to a close on the wholesome topic of internal household racism.

El Jaguar body slammed the audience with a few more quips before releasing us from the ring-side spectacle he has successfully presented. Disgusting, naughty and downright shameless are probably the only words to describe how this conglomerate of first-rate comedians operate. And that’s just the way we Kiwis like it. The NZ International Comedy Festival is on until 20 May and all those who performed at this Preview are performing hour shows at The Classic Comedy Club.