Competitive Darts events have become bigger and bolder as the years go by and the fans who attend love to dress up, have a good old sing along and dance to celebrate the ultimate score of onehundredandeighttttttyyyyyy!

Excitement is now building as New Zealand darts fans prepare for the arrival of the world’s best players, here to battle it out for the fourth Auckland Darts Masters brought to you by TAB and Burger King on August 3rd – 5th at the Trusts Arena.

This event is incredibly entertaining for all that attend; a cross between a prize fight, the Sevens and a pub charity event. Each player enters the venue to their own theme song, many have their own chants, some have crazy hair, all have nicknames and now, many off the top players are multi-millionaires. 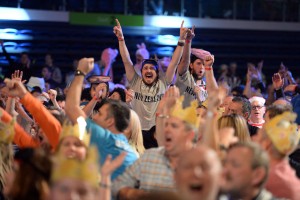 The World Series also has its own MC that travels with the event (the incredible John MacDonald), the characters that call the score, the barbed-wire voiced Russ Bray, and the sing-song George Noble – all are as popular as the darts players themselves.

When a player hits a 180, the crowd leaps to their feet and cheers excessively before beginning the Darts dance yet again. When a player is on a real winning streak the ultimate goal is a ‘nine dart finish’, cleaning up the entire 501 score in only 9 darts and finishing with a double – if this happens, expect a total meltdown from the 4,000 approx crowd per night.

Top-billing this year goes to the near-invincible Dutchman, Michael van Gerwen, who will be arriving in Auckland in hot form. Van Gerwen has never won the Auckland Darts Masters event, but has resumed his amazing form this year, claiming Masters and Premier League glory in a dozen tournament victories in recent months.

The world’s second-ranked player, Peter Wright, a fan favourite for his colourful hair and crowd-pleasing antics, is yet to fire at the Auckland Darts Masters, but the event has already proven a good place for an upset and 2018 could be his time. 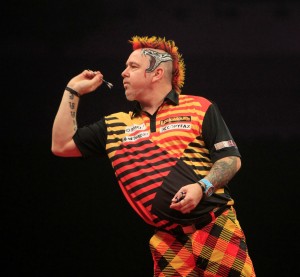 Our own Kiwi players are competition outsiders, but Auckland’s Cody Harris – who is now competing on the PDC circuit full-time – and Invercargill’s Warren Parry are gifted players who will be hoping to qualify among the eight Oceanic contenders threatening an upset.

Tickets for the Auckland Darts Masters are now on sale through www.ticketek.co.nz. This event is strictly R18.

For another chance to win visit and enter on our Facebook page.