It’s one of our favourite events of the year, so we’re super stoked to again be able to offer our lovely KUWNZ fans the chance to win one of four double passes to this crazy, cosplay nerd heaven that is Auckland Armageddon taking place at ASB Showgrounds, 19 – 22 October.

Heading into it’s twenty-third year, the go-to geek event of the year will host a massive range of national and international exhibitors from gaming giants to local artists. General entry tickets and VIP passes are on sale NOW from iTicket.

This year’s Auckland event features the biggest line-up of Celebrity guests the expo has ever hosted including; 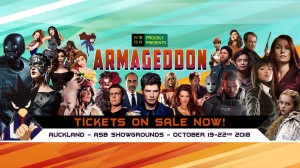 So,’ how to I win?’ we hear you cry? Well, there are three ways to enter – either via keepingupwithnz.com or the keepingupwithnz Facebook or Instagram.

To enter via the website, simply answer the below question:

Which confirmed guest of Auckland Armageddon appeared in Rogue One?

For more chances to win go to: