Show Me Shorts Film Festival, NZ’s only Academy Award accredited short film festival, is back for its 13th year. Screening at over 25 cinemas nationwide, it all kicks off with the Auckland Opening Night and Awards Ceremony at The Civic on 6th October.

The fifty top short films selected for the 2018 Show Me Shorts Film Festival have been unveiled today. The festival is a charitable trust and is dedicated to bringing us the best short films from New Zealand and around the world each year. The countries represented in this year’s programme includes Australia, Belgium, Brazil, China, France, Germany, Japan, South Korea, Lebanon, New Zealand, Norway, South Africa, Spain, Sweden, Switzerland, UK and USA. More than 30 international films in the programme will have their New Zealand debut so there’s sure to be something for everyone.

It always amazes me how powerful short films can be, and once again we’ve been lucky enough to have a sneak peek into the program to view a few select films. Below are my thoughts on a few that’ll be screening this spring.

This is a mixture of documentary and animation (and has won awards all over the place). It portrays one man’s struggle with his identity and relationship with his father. Born to a Jewish mother and Arab father, he recalls his need to find his place in the world while simultaneously trying to build the character of his father in his head. It’s surprisingly upbeat and funny more than it is uncomfortable and emotional. A story told with humour, pop culture references and pure heart.

Oh, Egg is so adorable!! This heart-warming animation from Norway (my homeland) is about Odd, a little boy who’s terrified of breaking his wee fragile head. Like all good coming of age stories, Egg meets a girl called Gunn, and they become instant best friends. Her eccentricities and creativity really bring him out of his shell, and a new confident Egg emerges. A real joy to watch that’ll leave a broad smile on your own big noggin.

The more I think about Bitch Boy, the more I like it. This German film begins with what you might think was a dark comedy, a fun frolic through a rebellious young boys mind. But, no it’s not that. It’s layered and upsetting and ultimately disturbing, but all the while manages to hook you into a part adventure part confessional tale. 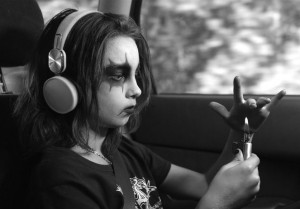 Another award-winning film, this sweetish animated musical is a breath of fresh creativity. A sort of stop-motion La La Land spiked with humour alongside the bleak sadness of its numerous comedic musical numbers. With lines like “I have no one to be with. I don’t know why?” and “When the burden is lifted, I will climb the ladder of happiness” you get the picture, right? Well, it’s a picture of anthropomorphised fish, mice, monkeys and dogs. You really have to see it. It really is quite a feat. Ultimately, it’s a commentary on the dreariness and dream-crushing reality of menial work within retail, hospitality and call centres. It’ll give you lots to think about and talk about afterwards.

One Day is set in the day in the life of a young mother with Obsessive Compulsive Disorder. It’s not an easy watch and does take you through an anxious rollercoaster that some may find unsettling. The writer/director, Nicky Cameron, shot the film with her husband, Dave Cameron, a well-known NZ cinematographer, and stars Chelsie Preston-Crayford. It’s simply shot in one room, but the sense of fear and compulsion is ricochet off those four walls right towards the viewer. A compelling and confronting watch.

With screenings across the country, from Kaitaia to Stewart Island, there are ample opportunities to get friends and family together and enjoy the range of films and events on offer. Full dates, locations and booking information is available here.